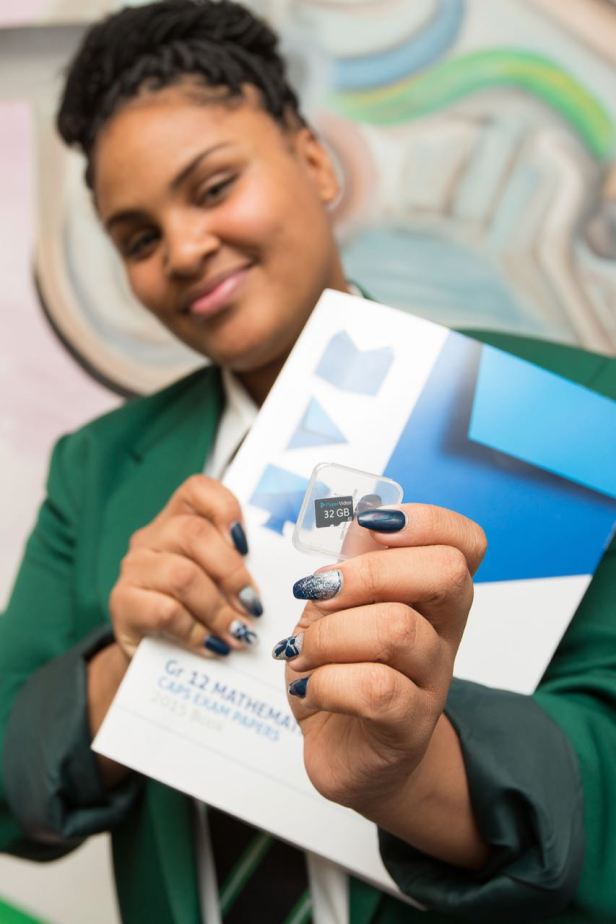 Situated in Cape Town’s Mitchell’s Plain and bordering on Khayelitsha, it serves some of the poorest communities.

Nearly half of the 1,250 pupils come from single parent families. The first thing many do when they come to school is to eat a breakfast their parents can’t afford to give them.

It is also an area of high gang violence, with local people complaining of gunshots almost every weekend.

“I had two learners shot, fortunately not dead. But we aspire to great things,” says the Oval North headmaster, Na-Aim Kassiem.

A quietly spoken man, who smiles a lot, Mr Kassiem says his teachers are truly inspirational.

He singled out two of his Maths teachers – both of whom are called Ms Abrahams. Staying on late at school and coming in on a Saturday, they have provided the right environment for these pupils to get to grips with Maths.

But if they fall behind, or struggle with a problem, they have a teaching tool to fall back on: Paper video.

“Learners get stuck,” says Mr Kassiem. “But with Paper Video they can turn to a lesson that will help them find the solution. They are taken through problems with a video every step of the way. They don’t fall behind.”

Paper Video, founded by Chris Mills and Paul Maree in 2014, provides books of past exam papers where every questions is linked to a video solution, taking students through the problem step-by-step.

When a student gets stuck an any particular question, they can access the video solution on any smart phone or computer.

Six teachers have been working hard to film a range of subjects. “They cover Maths, but also Physics and Chemistry, Biology and Accounting.”

Paper Video is collaborating with the Western Cape Education Department to further the reach of the resources and is in talks with National government regarding how their resources can be used for teacher training.

Among those whom it has helped with their learning at Oval High is Siphiwe.

It’s not just Oval North that is benefitting from this

Siphelele Xabendlini, from Philippi, became the first matric pupil from a previously disadvantaged school to ever make it to the top spot for physical science in the Western Cape.

He achieved full marks in the exam.

“I live in a shack, and I didn’t have a laptop with fancy programmes from the internet to help me.”

“I worked hard and studied only with my text books, Paper Video and The Answer series,” a said Xabendlini at the Western Cape 2016 National Senior Certificate Awards ceremony on Thursday.