It came like a bolt from the blue, but perhaps we should have been ready for it.

On  Tuesday Ethiopia’s governing party – the EPRDF – accepted the peace deal that ended its border war with Eritrea.

Ethiopia will “fully accept and implement” the agreement with Eritrea that was signed in 2000, its ruling coalition announced.

The signs that this was coming had been there since Prime Minister Abiy Ahmed’s inauguration address in April.

Prime Minister Abiy said: “With the government of Eritrea, we want from the bottom of our hearts that the disagreement that has reigned for years to comes to an end. We would also discharge our responsibility. While expressing our readiness resolve our differences through dialogue, I take this opportunity to call on the Eritrean government to take a similar stand not only for the sake of our common interest but also for the common blood relations between the peoples of the two countries.”

Then, in May, Prime Minister Abiy went to the northern region of Tigray, which has been most effected by the closure of the Ethiopia-Eritrean border. The Prime Minister had this to say to his audience.

“When asked about the Ethio-Eritrea issue, he said, he understands Tigrai is the most affected region and he will do everything in his power to bring peace to the region. He said while in Saudi Arabia he has asked the crown prince to help to bring peace between the two countries. PM Abiy told the participants, after he promised the crown prince that Ethiopia will abide by the Algiers Agreement if the regime in Asmara can sit down to talk on other issues, the crown prince tried to call Isaias Afeworki. The call was not returned but he is hopeful with Saudi and US help the issue will be resolved soon.”

Now the EPRDF has formally called on their Eritrean neighbours to respond to their peace offer.

“The Eritrean government should take the same stand without any prerequisite and accept our call to bring back the long-lost peace of the two brother nations as it was before,” the ruling Ethiopian People’s Revolutionary Democratic Front (EPRDF) wrote on Facebook.

Eritreans glued to their televisions and radios

Ethiopia’s promise to accept in full the Algiers peace agreement and the Boundary Commission’s ruling on where the border should be has electrified Eritreans. “They are glued to their televisions and radios,” an Eritrean friend told me.

Speaking from Asmara a member of Team Arbi Harnet said “this gives us a golden opportunity to mark the forthcoming June 20-Martyr’s Day, in a meaningful way restoring the dignity of our people.

We call for an end to the indefinite national service and the release of all political prisoners, we call for a positive response from Eritrea and thank EPRDF and Dr. Abiy Ahmed for taking the lead in ending this dark history of our sisterly countries.”

Echoing the call from activists inside Eritrea, Team Arbi Harnet in the diaspora say they will be carrying out a series of initiatives calling for

“1. An end to the indefinite national service and
2. The release of all political prisoners by June 20, 2018, the day Eritreans across the world mark Martyr’s Day to pay tribute to the thousands of freedom fighters who gave up their lives to liberate Eritrea. We ask upon all Eritreans to pressure the regime with the above to calls.”

So far the Eritrean government has offered no official response to the Ethiopian announcement.

There is no statement on the Eritrean Ministry of Information website.

The Minister of Information, Yemane Gebreab’s latest tweet is a book review. 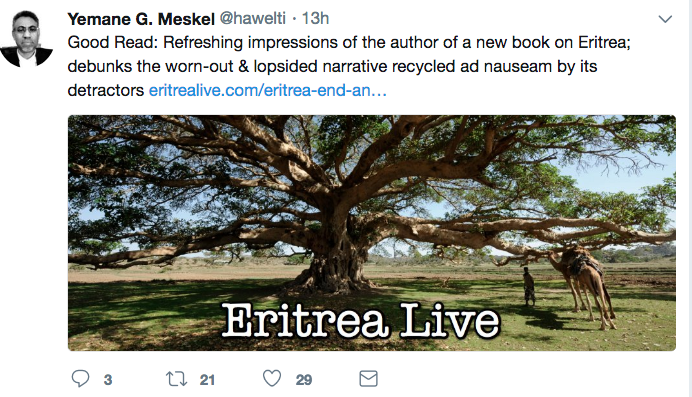 This is hardly surprising. The Ethiopian government’s move is a major development: one that has been anticipated, and hoped for, for years.

In reality it is no more than was required by its signature of the Algiers Peace Agreement in 2000 that ended the border war.

Both governments then made this promise:

The parties agree that the delimitation and demarcation determinations of the Commission shall be final and binding. Each party shall respect the border so determined, as well as territorial integrity and sovereignty of the other party.

This should have been the end of the matter, but Ethiopia called for further talks before implementation: a position the Eritrean government refused to accept.
Now this obstacle appears to have been removed.
But this move has been long delayed and Asmara is probably right to wait until it is formally informed by the Ethiopian government and sees the small print.
If the Ethiopian offer is genuine, and has no strings attached, then the United Nations is required to intervene.
The Algiers agreement said this:

Recognizing that the results of the delimitation and demarcation process are not yet known, the parties request the United Nations to facilitate resolution of problems which may arise due to the transfer of territorial control, including the consequences for individuals residing in previously disputed territory.

The UN should seize this opportunity by sending a high level delegation to both Addis Ababa and Asmara to immediately iron out any difficulties; to “facilitate” the resolution of any problems that may arise, as required by the Algiers agreement.
Only one response would be a catastrophic mistake: for Eritrea to do nothing.
President Isaias has allowed previous diplomatic opportunities to slip between his fingers. This must not happen again.
Caution is one thing. Prevarication is quite another.

5 thoughts on “Ethiopia offers peace, how will Eritrea and the UN respond? Recalling the Algiers Agreement”