This is an extraordinary story of bravery, with a doctor in Somaliland risking his life to confront kidnappers who had seized two British members of parliament, Tony Worthington and Mark Robinson.

Major was kept closely in touch with the entire operation.

The two men had been taken to Somaliland by the charity Action Aid in February 1994, to see the work they were doing.

They were both senior MPs.

Mark Robinson was Parliamentary Private Secretary to Linda Chalker, the Minister in charge of Africa.

In a series of cables to London, British ambassadors in the region explained just what took place.

The MPs had been travelling in the remote north-west of Somaliland (once a British colony) with Anne Johnson, a journalist from the Glasgow Herald.

The three were captured in the hills near the town of Erigavo, in the Sanag region.

Anne Johnson was soon released by her captors – members of a local clan.

The kidnappers promptly demanded $150,000 for the freedom of the MPs.

President Mohamed Egal – who led the Somaliland (which claimed its independence from Somalia) – said he was planning to hire a plane from Nairobi and fly a negotiating team to try to gain the men’s release.

President Egal assured the British that they should not be concerned if they had reports that he was assembling troops, since he had no intention of undertaking a military rescue.

A doctor to the rescue

To the obvious relief of all concerned a local doctor finally came to the rescue, putting his own life on the line. 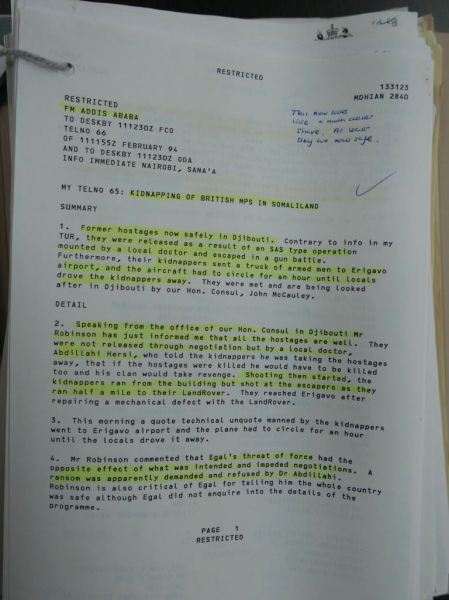 As a telex from the British ambassador in neighouring Ethiopia explained, Dr Abdillahi Hersi mounted what was described as “an SAS style operation” and escaped in a gun battle.

Dr Abdillahi “told the kidnappers he was taking the hostages away, that if they hostages were killed he would have to be killed too and his clan would take revenge.”

It was a very Somali threat and it worked.

Shooting did indeed take place, the men fled to a waiting Landrover half a mile away, which promptly refused to start.

It was only when they managed to repair the vehicle that they could finally escape to an aircraft, which had been circling for an hour overhead.

The British ambassador comments tersely that: Mr Robinson commented that “Egal’s threat of force had the opposite effect of what was intended and impeded negotiations. A ransom was apparently demanded and refused by Dr Abdillahi. Robinson is also critical of Egal for telling him the whole country was safe although Egal did not enquire into the details of the programme.”

Action Aid commented that Somaliland was generally safe and that “What should be remarked on was the goodwill of the neighbouring clan elders and the swift and effective manner in which they used traditional problem-solving mechanism to resolve the situation, with support from President Egal.”

The brave Dr Abdillahi has since died, according to Action Aid, who provided the following statement.

“We understand the doctor was asked by the community elders to help ensure the rescue, as peacefully as possible. ActionAid’s approach is that we are rooted in local communities – our local partners work very closely with the elders, build long-term links with those communities and ensure local people are those that are trained to support the program and ensure long term sustainable change. We know the doctor had strong links with the community, and worked in the local hospital. He has since passed away.

In incidents like this ActionAid doesn’t act as the authority, police force or military. Our ethos is to do no harm to either beneficiaries, supporters or the wider community.  We would have been working with the community with respect to any decisions being made, and will always bear in mind the sensitivities of any given context.  The care and protection of those involved would have been decided and implemented by the community and supported by our partners to ensure that there was no further disruption, and potential threat for those involved.

For some more background, ActionAid Somaliland opened its first office in Erigavo in 1992 and began working with eight partners in three regions to rebuild conflict scarred communities and equip women with the tools they need to combat injustice.”