Cape Town-born Benjamin Pogrund, an early confidant of Mandela, wrote a book arguing ‘A’ word doesn’t apply to Israel. Now he fears state will become ‘mirror of what apartheid was’ 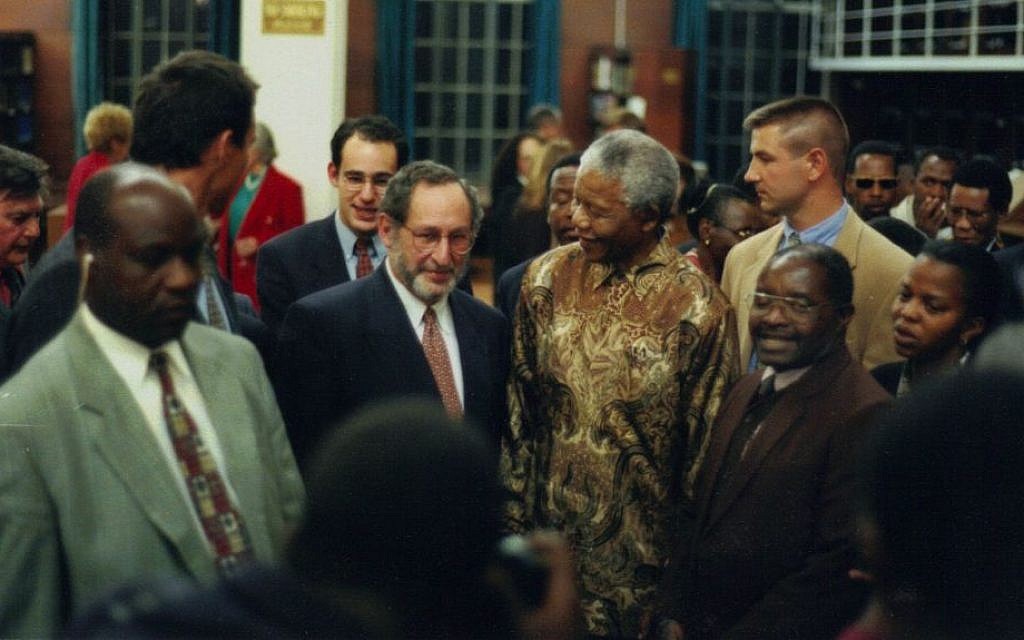 An early ally of Nelson Mandela, journalist and author Benjamin Pogrund was among the first Jews to fight the South African apartheid regime. After he moved to Israel in the 1990s, he fought the accusation that Israel is an apartheid state.

But if Prime Minister Benjamin Netanyahu goes ahead with his plan to unilaterally annex large parts of the West Bank, apparently without offering Israeli citizenship to the Palestinians who live in these areas, Israel will indeed turn into an apartheid state, Pogrund warned.

“I have argued, uphill and down dale, and lectured about it in a dozen countries and books and articles, that this is not apartheid. There is discrimination against the Arab minority and there’s an occupation in the West Bank — but it’s not apartheid,” he said in an interview Thursday.

“Come July 1, if we annex the Jordan Valley and the settlement areas, we are apartheid. Full stop. There’s no question about it.”

Vision for Peace Conceptual Map published by the Trump Administration on January 28, 2020.

According to the coalition agreement between Netanyahu’s Likud party and Defense Minister Benny Gantz’s Blue and White list, the annexation of some 30 percent of the West Bank can be brought to vote in the cabinet or the Knesset as early as July 1. However, Likud officials have in recent days indicated that the process may be delayed by a few days or even weeks, presumably due  to opposition from the White House.

A political dove, Pogrund, 87, has long opposed the expansion of settlements and the entrenchment of Israeli control over the West Bank. “But at least it has been a military occupation. Now we are going to put other people under our control and not give them citizenship. That is apartheid. That is an exact mirror of what apartheid was [in South Africa],” he said.

It is unclear exactly how many Palestinians currently reside on territory that Israel would annex, as no precise maps have been released yet. Estimates range from several thousands to more than 100,000. Netanyahu said in a newspaper interview last week that these Palestinians “will remain Palestinian subjects” living in “enclaves” and would not receive Israeli citizenship.

For Pogrund, who lives in Jerusalem where he continues to writes books about South African history, the idea of Palestinian enclaves within sovereign Israel is reminiscent of the bantustans in apartheid South Africa — non-contiguous territories the racist Afrikaner government set aside for blacks.

“The bantustans were simply a more refined form of apartheid to mask what it really was,” said Pogrund, who was born and raised in Cape Town. “One of them had 15 areas that were unconnected to each other; we called it a nonsense state. The same now with whatever Palestinian state comes out of this, with a whole lot of bits and pieces here and there — it’s a nonsense state.”

Friends of ours in the world will not be able to defend us. Apartheid was the scourge word of the second half of the 20th century, coming after Nazism

There are other examples of enclaves in the world, but a unilateral Israeli annexation within the framework of the US administration’s peace plan would uniquely lead to an unjust system that will indeed be deserving of the a-word, Pogrund asserted.

“And the consequences of this will obviously be extremely grave. Friends of ours in the world will not be able to defend us. Apartheid was the scourge word of the second half of the 20th century, coming after Nazism. And it was loathed, and the BDS [Boycott, Divestment and Sanction movement] people have picked up on it, and they are misusing it up until now,” he went on.

“They will now be wholly correct in using it as a weapon against us. And it’s a tough weapon, it’s an emotional weapon that gets to people very simply.”

The juxtaposition of Israel and apartheid gained pace with the 2001 “World Conference against Racism” in Durban, which turned into an anti-Israel hate-fest, and has since become a staple of anti-Israel agitation.

Pogrund attended the conference as an official member of the Israeli delegation. He was involved due to his intimate knowledge of South Africa and his bona fide credentials as an opponent of racism and apartheid.

As a young reporter in Cape Town, Pogrund had pioneered the reporting of black politics in apartheid South Africa over 26 years of working for the Rand Daily Mail, one of the country’s leading newspapers. He quickly became a confidant and personal friend of Nelson Mandela. In 1961, as his paper’s African affairs reporter, Pogrund helped the future president organize an illegal strike.

“We had a system of sending messages to arrange to meet, which would either be at a friend’s house in Fordsburg, or when I would drive to a street corner at night, pick up Mandela — his worker’s overalls disguise did little to hide his tall, imposing figure — and we would sit in my car in a dark street and talk about the strike campaign.”

Pogrund’s ties to Mandela and other anti-apartheid activists got him into trouble with the authorities. He had his passport revoked, was harassed by police and put on trial several times, and even sent to jail once for refusing to disclose a source.

In the mid-1980s, Pogrund and his wife were the first non-family members to visit Mandela in his prison cell on Robben Island, where he was serving a life sentence for sabotage and conspiracy to violently overthrow the government.

From South Africa to Israel

In 1997, Pogrund immigrated to Israel to found the Yakar Center for Social Concern in Jerusalem, which he led for 13 years. In 2014, he published “Drawing Fire: Investigating the Accusations of Apartheid in Israel,” a book of nearly 300 pages in which he attempts to prove that the Afrikaner regime in South Africa cannot be compared with the Jewish state today.

“Yes, Israel’s Arab minority does suffer discrimination, but their lot is not remotely comparable with blacks under apartheid. To claim they are the same is to stretch, bend, twist and contort truth,” he wrote.

The situation in the West Bank is more complex, Pogrund admitted. The status quo there is a “tyranny,” obviously colonialism and an international offense, he said. “But to claim that this is the same racist rule as apartheid South Africa is without substance or truth.”

Six years on, Pogrund fears that the parallel he so vigorously denounced as false may soon become true.

“Once we implement annexation, we’re an apartheid state. It’s apartheid. And I am deeply, deeply sorry to say it,” he said in the interview. “This is the desecration of Zionism, which is why I came on aliyah 22 years ago.”

But Pogrund is not only angry at the right-wing government, he is also disappointed with the left-wing opposition and the general population, which no longer seems to strive for peace.

“I look at the peace movement here — it’s lost. The left has nowhere to go,” he said. “And I look at the emotions expressed by so many [right-wing] Israelis, and my heart just sinks.

“I think we’re going through a terrible phase, and we’re going to pay a price for it somewhere, which will shock us into coming back to where we really should be, in terms of Jewish values.”