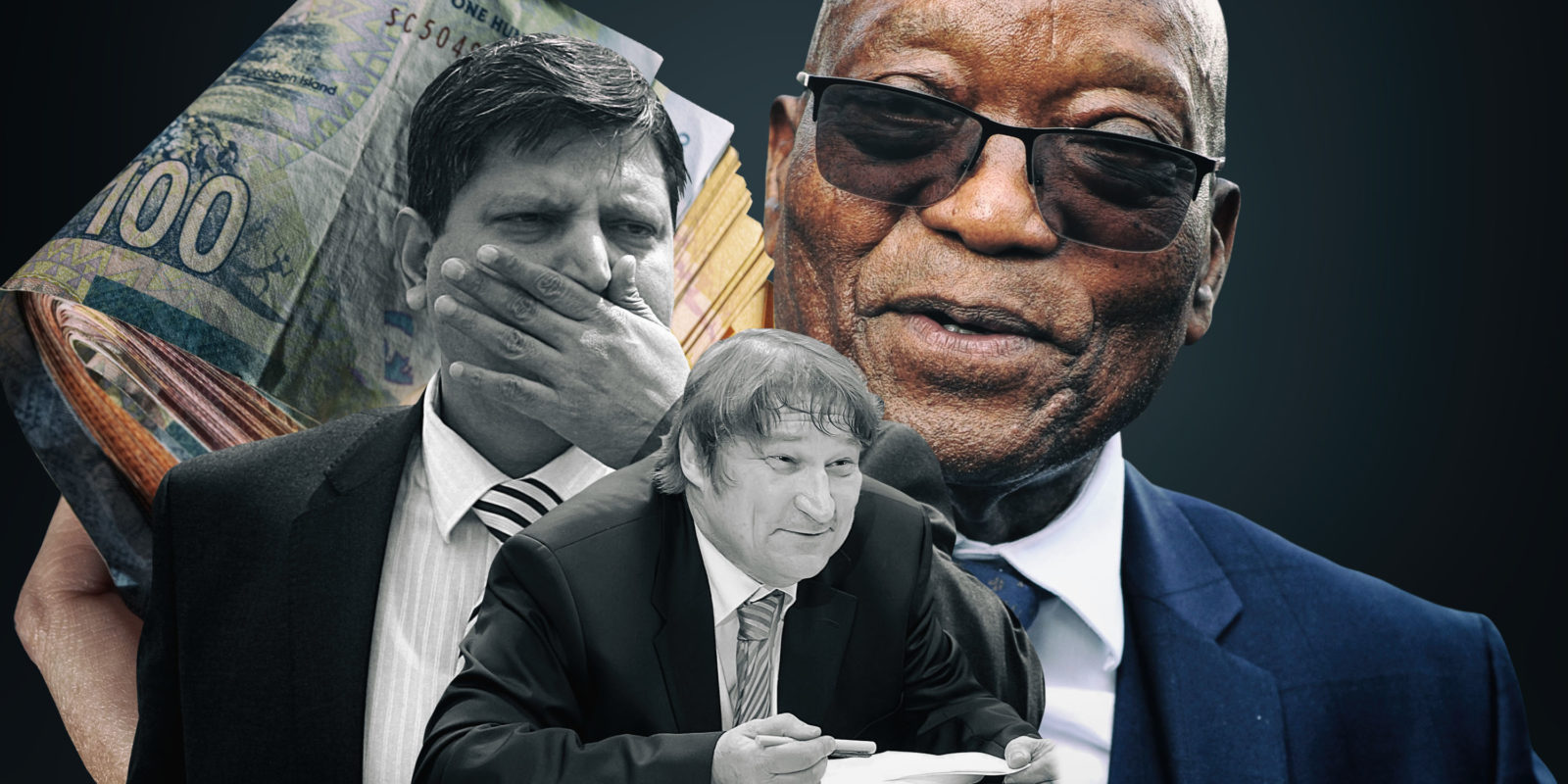 In a bombshell day of testimony at the Zondo Commission, it was revealed that money from the Gupta enterprise paid Jacob Zuma’s Arms Deal legal fees – even while the state was ostensibly footing the legal bill. It has also emerged that the Guptas made use of an international money laundering framework used to finance terrorism and drug cartels.

Research to this effect was presented to the Zondo Commission on Tuesday by Shadow World Investigations’ Paul Holden.https://buy.tinypass.com/checkout/template/cacheableShow?aid=eviNBV2Qpu&templateId=OTYR4WOPMWPF&templateVariantId=OTVG00OFXNIEH&offerId=fakeOfferId&experienceId=EXPBNOQF5RCC&iframeId=offer_08d2e0c5439780efc3b0-0&displayMode=inline&widget=template

A 2013 invoice presented to the commission shows Kemp J Kemp billing Zuma’s lawyers Hulley & Associates for legal services rendered in relation to Zuma’s unsuccessful attempt to oppose the DA’s application to overturn the decision of the National Directorate of Public Prosecutions not to prosecute Zuma in relation to the Arms Deal.

An amount of R60,676.37 was paid to settle an outstanding bill from Kemp, with the funds channelled to Kemp through Gupta front companies Homix and Bapu Trading.

This was at a time when the state was covering Zuma’s legal fees as a result of an agreement reached during the presidency of Thabo Mbeki – much to the displeasure of the DA, which succeeded in having the agreement overturned in December 2018.

Exactly why Kemp was apparently being paid twice for the same work is unclear – with Kemp having succumbed to Covid-19 in January 2021.

In what evidence leader Matthew Chaskalson termed “another disturbing discovery”, Holden also told the State Capture inquiry that at least two of the Guptas’ front companies were using a money laundering operation which has been used to launder money for international drug cartels and for terrorist groups, including Al Qaeda.

Payments were made by the firms Donsantel 133 CC and Truhaven into the Khanani money laundering organisation: the brainchild of Altaf Khanani, known as the world’s most-wanted money launderer.

A US investigation had established that the Khanani network was used for “heinous criminal activities”, Holden said.

This revelation emerged as Holden sketched what he called the “spider web”, which he defined as “an extraordinarily busy and complex money laundering network” used by the Gupta enterprise.

“Contractors to the state would make multiple payments to these,” Holden said, in what was just the initial part of a much broader scheme.

This “local laundromat” would connect into an “international laundromat”: a system of connected entities that would launder money by passing it through multiple accounts until it exits.

Holden stressed that it is generally impossible to trace the end point of these funds due to the sophisticated nature of the network. It appeared, he said, that the Guptas made use of pre-existing criminal networks predominantly in Hong Kong, China and Dubai.

The researcher told the commission that Gupta companies transferred just under R5-billion offshore in 3,659 transactions between 2010 and 2021 via “a vast international laundry operation I call the Hong Kong/China laundry”.

During Holden’s previous appearance before the Zondo Commission, in May, he put the total amount lost to the Guptas’ State Capture at almost R50-billion.

The figure has now risen to just over R57-billion, due largely to new evidence presented to the commission regarding IT company T-Systems’ contracts with the state. Between January 2010 and December 2014, T-Systems charged Transnet an average amount of R263,408,760.30.

Over the next four years, with the contract renewed, Transnet paid T-Systems more than three times this amount – despite the fact that the services being rendered by T-Systems had diminished. Between January 2015 and December 2018, equipment sales and rentals previously covered by T-Systems were now handled by a company called Zestilor – owned by Zeenat Osmany, the wife of Gupta lieutenant Salim Essa.

The day’s hearing at the Zondo Commission began with the reading of a number of affidavits from parties implicated in Holden’s previous testimony at the State Capture inquiry. Holden noted that although there have been “objections to very specific elements” of his findings, there has been no substantive disagreement with the “general thrust”.

Said Holden: “I don’t believe that any of the information presented would make me think [that] these weren’t contracts tainted by State Capture.”