Some Amhara groups, who have also been engaged in conflict, have been similarly critical and disappointed at not being included in the talks. The Fano militia denounced the agreement for endorsing the current constitution, which it sees as marginalising Amhara interests.

While many have celebrated the ceasefire agreement, some prominent Tigrayan groups see it as a surrender. 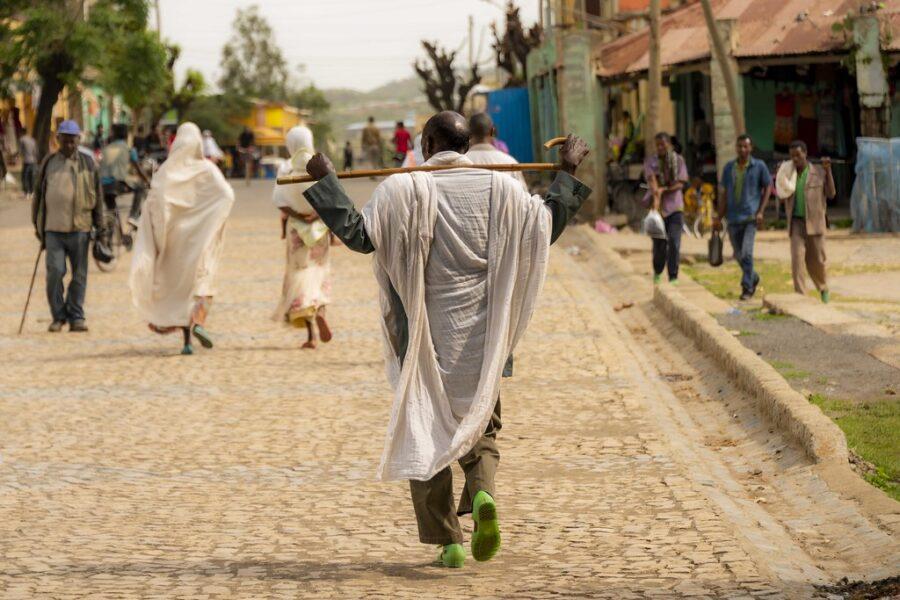 The peace deal brings hope that two years of devastating war in the Tigray region of Ethiopia could be coming to an end but the real challenges lie ahead. Credit: Rod Waddington.

Under its terms, the TPLF will accept a return to the previous constitutional order, including federal authority in Tigray. A new interim administration will govern the region until elections. And the TPLF will fully disarm within 30 days, recognising that Ethiopia has “only one defence force”.

In return, the federal government has agreed to improve the representation of Tigray in federal institutions, including parliament. It will expedite humanitarian aid to the region, where over 13 million people need food assistance. It will facilitate the return of displaced communities. And it will restore essential services, some of which have been blocked since the outbreak of the conflict.

Regional and international leaders have largely praised the deal, with the lead AU mediator Olusegun Obasanjo referring to it as “the beginning of a new dawn for Ethiopia”. The federal government has been similarly buoyant, with Prime Minister Abiy Ahmed telling jubilant crowds that Ethiopia had got “100%” of what it wanted.

Some groups, however, have been less pleased. Several dominant Tigrayan groups have responded with disbelief and denial, seeing the deal as a surrender. The Global Society of Tigrayan Scholars & Professionals (GSTS), for instance, argued that the Ethiopian military cannot guarantee security and rejected the disarmament of the Tigrayan Defence Forces (TDF). The network also criticised the ceasefire agreement for not calling on Eritrea forces to leave and lamented the lack of clear timeline for facilitating aid, restoring services, and returning displaced people.

Some Amhara groups, who have also been engaged in conflict, have been similarly critical and disappointed at not being included in the talks. The Fano militia denounced the agreement for endorsing the current constitution, which it sees as marginalising Amhara interests. Meanwhile, a politician for the opposition National Movement of Amhara (NAMA) complained that the deal does not recognise Amhara’s claim to two areas – Welkait and Raya – that are heavily disputed with Tigray.

The mixture of reactions points to the both the huge potential and the challenges now facing Ethiopia.

On the one hand, the opportunity for lasting peace created by the peace deal has been hard to imagine for much of the past two years. Since the war broke out, hundreds of thousands of people have been killed and millions displaced. There have been accusations of war crimes and use of sexual violence as a weapon of war on both sides. Ethiopian society has polarised amid a rise of dangerous rhetoric. In this context, any agreement that could bring an end to hostilities is a positive development.

Moreover, it is reassuring that mediators recognise that the hard work is yet to come. Obasanjo has emphasised that “this moment is not the end of the peace process but the beginning of it”.  Uhuru Kenyatta, another one of the mediators, has warned that “the devil will be in the implementation”.

On the other hand, many of the criticisms of the peace deal are valid and point to difficult challenges ahead. It is true that the agreement lacks a clear timetable for the provision of desperately needed humanitarian aid and the restoration of services. Many of the most contentious and intractable disagreements – such as over contested areas in which both Tigray and Amhara accuse the other side of ethnic cleansing – remain unresolved, with the deal just saying they will be settled according to the constitution. And the promise to disarm TPLF combatants within 30 days seems highly ambitious.

It is difficult to imagine how Tigray soldiers will feel confident laying down their arms when Eritrean soldiers, who intervened in support of federal government, are still believed to be present in the region – yet are not mentioned in the peace deal. It is similarly hard to see how they will put their trust in the Ethiopian army, which has been accused of countless war crimes against their forces over the past two years, to be their guarantor of security. The deal paves the way for federal forces to enter the Tigrayan capital Mekelle and take control of all airports, highways, and federal facilities. Moreover, disarmament and reintegration typically take months, if not years.

Indeed, trust will may the most difficult factor to rebuild going forwards – at many levels. For two years, Ethiopian officials – including Prime Minister Abiy – have spoken of the TPLF and Tigrayans as a cancer and a weed. Ethnic hate speech and hate crimes have soared, with Ethiopian society becoming more divided. And both sides have denied culpability in widespread war crimes despite the evidence.

In this context, the reintegration of TPLF combatants in the national military and the idea of reconciliation and transitional justice will be uphill struggles. So too will be reconciling other related conflicts in Ethiopia, such as in Oromia, which are not mentioned in the deal.

The guns have not yet gone silent in Tigray. The signatories to the agreement, which leaves much unsaid, are still discussing its details and implementation. Much rests on the good will of the AU and other international bodies to ensure the agreement is honoured. But any even tentative step towards peace after two harrowing years is a step in the right direction.