Want to know how bad corruption is under Jacob Zuma’s ANC? As one commentator put it:

“Irregular expenditure, the Auditor General found, amounted to R46.36-billion, an increase of almost 80% from the previous year.” [See below]

These graphs – from the Auditor General’s official report – explain just how bad it is and its link to the ANC.

The first is for the North West, run by the ANC. 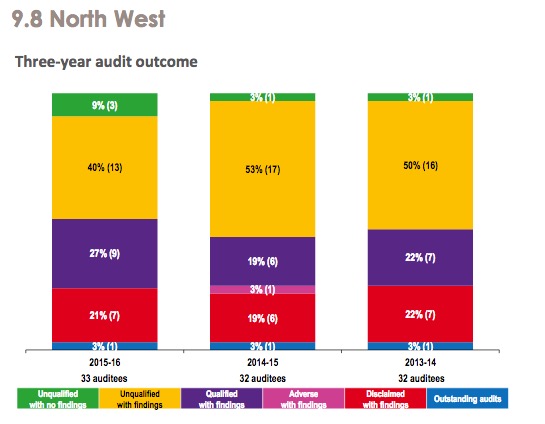 Just 9% of all the audits were unqualified. In other words fewer than one in ten contracts were not suspicious or – as in the 21% in red – probably clearly corrupt.

Now look at the Western Cape, run by the Democratic Alliance.

Nearly 8 out of 10 contracts are unqualified, or certified as ‘clean’. The rest are probably OK, but need some attention.

This is the comment on the report from the Daily Maverick

The AG’s latest report covers a total of 484 auditees, which included 169 national and provincial departments and 315 public entities with a total budget of R1.2-trillion for the year under review. Let’s just write that one out to feel the full effect of the eye-watering enormity of the number:

Six auditees were responsible for just over 50% of the irregular expenditure, including the Passenger Rail Agency of South Africa, the KwaZulu-Natal and Mpumalanga departments of Health, the Road and Transport and Human Settlements departments in Gauteng and the Department of Water and Sanitation.

“As we have also reported previously, the Departments of Education, Health and Public Works that are responsible for almost 37% of the budget and for implementing key programmes to improve the health and welfare of citizens, continue to have the poorest outcomes – 40% of these departments received qualified or disclaimed audit opinions compared to 13% of other departments,” the AG noted.

Irregular expenditure, the AG found, amounted to R46.36-billion, an increase of almost 80% from the previous year.

“The main reason for the increase in irregular expenditure was the continued non-compliance with supply chain management legislation. Irregular expenditure represents expenditure incurred towards procurement of goods and services without following prescribed processes. The controls that should be put in place in the procurement process are derived from the constitutional requirements of supply chain management, as set out in section 217 of the Constitution,” said the AG.

One thought on “South Africa: The depth of corruption in two images”