Is the Eritrean ruling party holding a four day conference in the Dutch town of Veldhoven or not?

Yesterday, protests by Eritrean refugees living in the Netherlands resulted in the mayor banning the event.

But there is now contradictory information about whether the meeting – organised by the young with the Eritrea’s sole authorised political party (the YPFDJ) – is going ahead.

A spokesman for the NH Hotel Group, Jeroen Schaling, says it is not.

“We are co-operating with the authorities following the mayor’s order and with the conference organisers to resolve the situation,” he said. He said there were many Eritreans inside the hotel, but that following the ban the meeting did not continue.

But other sources suggest it is taking place, despite the mayor’s instructions.

Maria Burger, a spokeswoman for the mayor, said it is their understanding that the conference is still under way.

Pictures have emerged on social media suggesting that this is indeed the case. 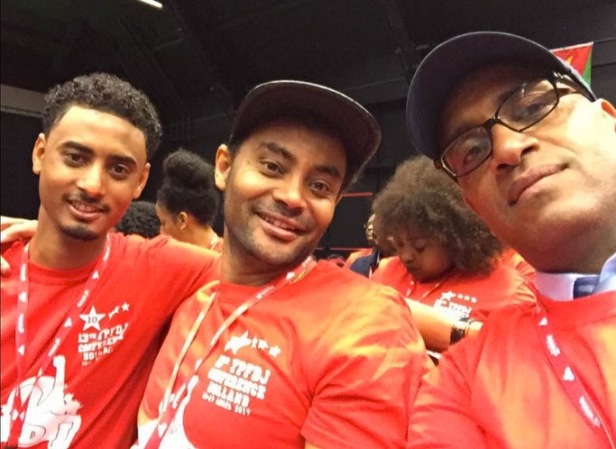 The YPFDJ is taking the matter to court, with an urgent application to have the injunction lifted.

The hearing will take place at 2.00 pm this afternoon. The mayor of Veldhoven, Jack Mikkers, will be in court to defend his decision.

Below is the background to this developing story.

A carefully planned European wide conference was organised by the Eritrean government’s only authorised political party.  The mayor of the town of Veldhoven, where the conference was to be held, said security and public order could not be guaranteed, and ordered that it be halted.

The conference, called by the youth wing of Eritrea’s ruling party – the YPFDJ – was the 13th such pan-European event, designed to drum up support for the Eritrean regime.

But determined there was picketing by Eritrean refugees who had made their homes in the Netherlands to try to prevent the gathering from taking place.

In a series of protests members of the opposition chanted slogans and sat down in the road.

This was the report of these events by the Volkskrant – one of the Netherland’s main newspapers.

“The mayor of Veldhoven, Jack Mikkers, has banned the meeting of the youth movement of the Eritrean regime. The reason given were “two incidents” involving opponents of the conference. Security and public order, according to the mayor, public prosecutor and police could not be guaranteed.

This fear of the government that the conference, which was due to last until Sunday, might provoke unrest had come true. Dozens of protesters gathered on Thursday to protest against the meeting. They gathered at conference center Koningshof where Yermane Gebreab, a confidant of President Isaias Afewerki, was due to speak.

Some demonstrators threw himself in front of a car in which an Eritrean diplomat would arrive. The police intervene after protesters received blows. The demonstrators then left. But some refused and there were about forty arrests. They were taken by bus to the police  bureau in Eindhoven. How many of them were held, is not known.

Kubrom Dafla Hosabay, former secretary of state in Eritrea, who fled to the Netherlands in 2010 because he no longer felt safe, organised the protest. He too was arrested. “We have been arrested, but I do not know why. We are registered and all our belongings are taken,” he said from the police station in Eindhoven.”

Of some skirmishes at the rally Hosabay said he knew nothing. He described the cancellation of the conference as a ‘success’. ‘The municipality has cancelled the conference, which is a good thing, its what we wanted.'”

There had been plenty of warning of the danger that this conference presented. There were allegations that members of the YPFDJ were going house to house in the Eritrean refugee community demanding support for the Veldhoven event.

As the Volkskrant put it: “’We know where you live … Such expression is often regarded in the Netherlands as a threat and under certain circumstances, a criminal offense. Difficult to prove, but serious and certainly undesirable. Therefore, the commotion that has arisen over the coming of Yemane Gebreab – a senior Eritrean official, direct from Eritrea’s dictatorial President Isaias Afewerki, is not difficult to understand.”

Dutch government put out a statement on Tuesday, expressing its concern.

The Eritrean embassy in Brussels has informed the Dutch authorities by diplomatic note that Mr. Gebreab, an employee of the Eritrean President, wants to come to the Netherlands to speak to Eritrean youth at a youth conference. The government is concerned about the Human rights situation in Eritrea. The Cabinet is uncomfortable with the visit of Gebreab for this reason, because the high Eritrean official will speak to Eritreans that have left their country. The visit of Gebreab will therefore not be facilitated and will be treated as a private visit. This means that he will not be received by the Dutch government or high officials here. Because Mr. Gebreab already has a Schengen-visa the government has not been confronted with the question whether a visa should or should not be issued.

Many Dutch MPs and most of the country’s political parties called for the conference to be called off. But still the PFDJ pressed on, insisting that Yemane Gebreab should speak. The Eritrean diaspora was left with little alternative but to take to the streets to halt the regime’s propaganda.

Not the first setback for the Eritrean president

This is the latest in a series of reversals for President Isaias.

In June 2016 thousands of Eritreans from across Europe came to support the UN Commission of Inquiry report being presented to the UN in Geneva. Although the regime’s supporters were also present, they were dramatically outnumbered by those supporting the Commission’s findings that the Eritrean government was responsible for “crimes against humanity.”

Selam Kidane, one of the organisers of the protests had travelled from the UK to demand justice. “We sincerely hope that the world will see how bad things are in Eritrea and how determined Eritreans are to ensure accountability,” she said.

Then in October last year Yemane Gebreab was prevented from attending a meeting arranged by the Atlantic Council. The State Department had invoked an executive order, signed by President Obama, which listed Yemane as among those who were being sanctioned.

The Eritrean government was furious, denouncing this as “a denial of the right of assembly.”

One thought on “Confusion surrounds Eritrean conference in Netherlands”