It now out in the open. The Economic Freedom Fighters are threatening journalists.

This abusive image has been re-tweeted by Julius Malema, self-styled “Commander in Chief of Economic Freedom Fighters [EFF].”

The journalists are described as “WMC Paid” – accusing them of being in the pocket of “White Monopoly Capital.” And just to their left is a cross-hair sybol – representing the sights of a rifle.

This was the phrase deployed by the notorious British Public Relations firm, Bell Pottinger, to attack enemies of the Gupta family, who were accused of being involved in corruption so severe that they had effectively ‘captured’ the South African state via President Jacob Zuma.

Now the EFF has adopted this phrase – threatening violence against some of South Africa’s most respected journalists. It is a very worrying development – especially as the country heads for the 8th May general election. 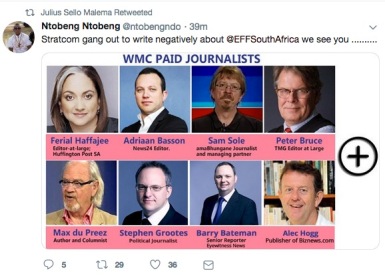