The report from Africa Confidential below comes as the UN OCHA is also reporting renewed fighting in Tigray.

“The situation in northern Ethiopia remains tense and fluid with reported clashes in some areas in Amhara along the border with Tigray in North Gondar, Wag Hemra, North and South Wello, and North Shewa zones. Fighting was also reported along Afar and Tigray border areas.

Drone strikes reported on 15 January against Maychew, Korem in Samre towns in Southern and South-Eastern zones in Tigray reportedly killing a dozen of civilians and injuring several others. Another airstrike reported on 13 January on two stationary vehicles in May Tsebri town, in North-Western Zone, with no reported casualties.  The hostilities are putting the civilian lives at risk and hindering humanitarian access and delivery of aid to those affected areas.”

After concessions, rival armies fight on

Addis Ababa released some prisoners and Tigray proposed a ceasefire. But despite weakened forces, there is little prospect of negotiations 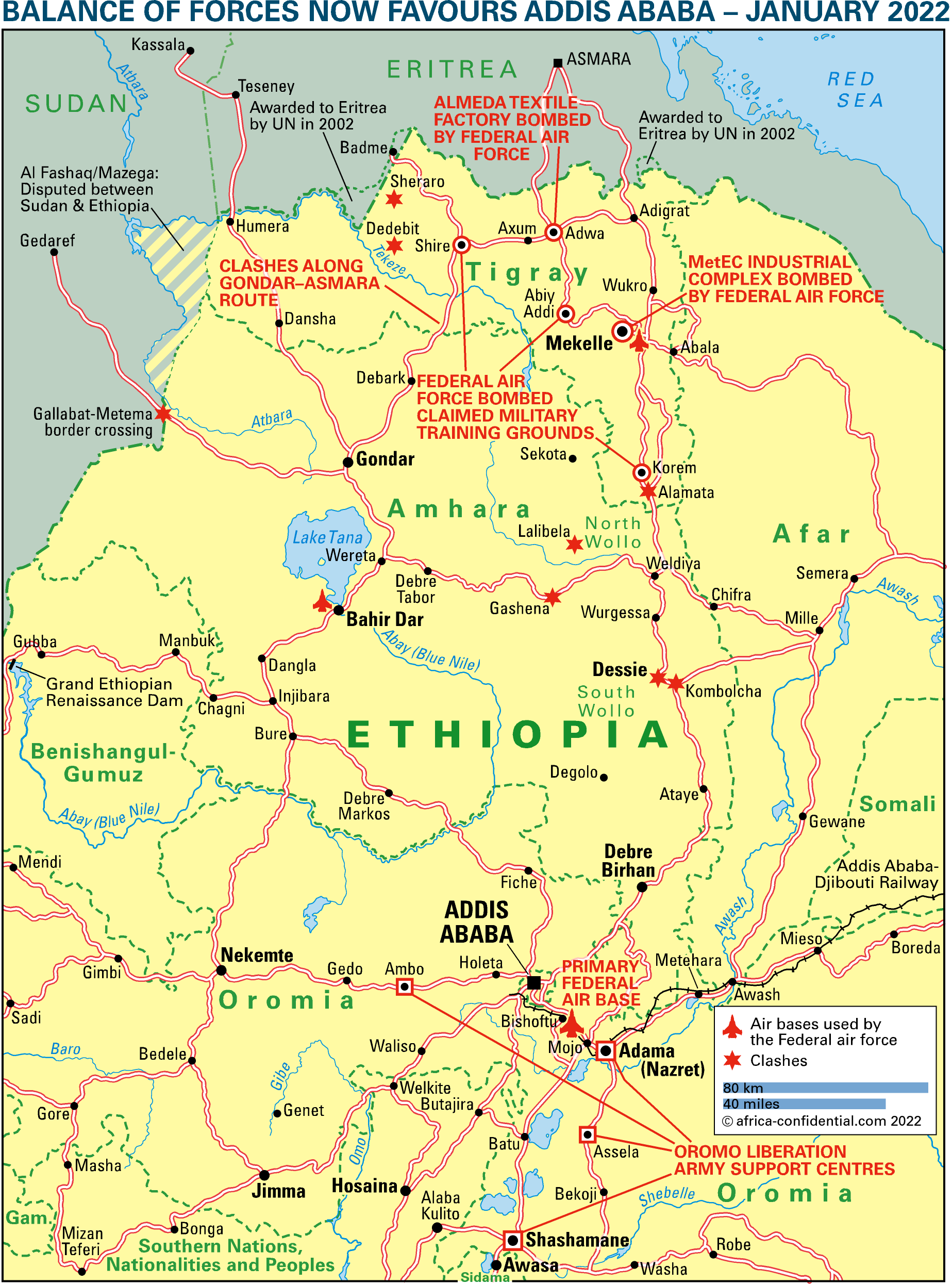 The slowing of military operations follows 14 months of fighting which have inflicted heavy losses on both the Federal army and the Tigray forces and killed thousands of civilians. For all their propaganda, neither side can claim victory is in sight. Neither is preparing for an end to hostilities. This war of attrition looks set to stretch into much of the new year, and possibly beyond.

Over the past three months the balance of forces has moved decisively, but not irreversibly, in favour of the federal government in Addis Ababa. Sporadic but devastating air raids by the federal air force on military targets and civilian centres kept up the pressure on Tigray in early January.

There was a brief hiatus after 19 December when Debretsion Gebremichael, leader of the Tigray People’s Liberation Front (TPLF), announced Tigray’s forces were withdrawing to their home region to create space for negotiations on a ceasefire (Dispatches 20/12/21, Tigrayan offer to withdraw opens door to a ceasefire as UN Security Council debates humanitarian crisis).

Six months earlier, when federal troops withdrew from Mekelle, the capital of Tigray, Addis Ababa made a similar ceasefire offer. This time, it was Addis that spurned the peace offering, dismissing it as theatre. But Prime Minister Abiy Ahmed‘s government said it would not push further into Tigray. To some that suggests weakness.

At first glance, the retreat of Tigrayan forces last month had looked like a complete defeat, but the reality is different. Without doubt, the TPLF regional government and the Tigray Defence Forces (TDF) are facing a strategic dilemma. For now, they have few defences against the federal forces which have been deploying Turkish Bayraktar TB2 drones with UMTAS missiles to devastating effect. The federal air force has added to the pressure by bombing what it identified as three training grounds in Mekelle as well as logistics centres at Shire, Abiy Adi and Korem.

The drone and bombing campaign cut many of the TDF’s supply lines, forcing it to abandon its southward march in early December. Yet the Ethiopian National Defence Force (ENDF) was further weakened during the previous five months when the Tigrayan forces were advancing on Addis Ababa.

One military source in the capital, quoting from official reports, reckons the federal soldiers and regional militia could have lost up to half their force strength of some 400,000 personnel. Those losses have made the federal government press ahead with its mass recruitment drive, albeit of inexperienced and untrained youths. The TDF also managed to loot large quantities of fuel and armaments.

Weeks before the federal soldiers entered Kombolcha on 7 December, much of the TDF had left the city and immediate environs, securing vantage points in the highlands from which it launched strikes against the incoming forces.

Likewise, when the federal forces took back the historic town of Lalibela in Amhara region, with its churches hewn from rock, the TDF fighters moved to the surrounding hillsides to fire on the soldiers as they arrived. So successful was this tactic that the TDF retook the town, before withdrawing again in early December (AC Vol 62 No 23, Rebel advance drives a diplomatic flurry).

We hear federal officers relayed reports of these tactics back to officials in Addis Ababa, warning that the headline news of captured towns and cities was costing the lives of thousands of their soldiers.

Federal military officers who wanted a slow build-up of strength and control differed over tactics with officials in Addis Ababa whose overwhelming priority was a declaration of victory (AC Vol 63 No 1, Military tactics dominate).

All sides are continuing to recruit, preparing for the next chapter of the war. Military sources in Addis Ababa and well-connected Tigrayans report that the TDF has over 200,000 fighters, some say double that, and it is training still more.

In a region of just over seven million where many farmers have served in militaries and militia over the years, the dividing line between an organised regional army and an irregular one is blurred. More than definitions, the critical factors are military skills, tactical acuity and supplies. It is the last that is Tigray’s greatest vulnerability.

The Tigray forces may have lost several field commanders during the air strikes but it was no rout. Senior officers in the TDF  coordinated the withdrawal to ensure minimum loss of personnel and logistics. They also managed to inflict heavy losses on federal forces around Dessie and Gashena in Amhara, and Alamata in southern Tigray over about five weeks in late November and December.

Those losses raise questions about the federal forces’ ability to maintain security in northern Amhara and southern Tigray, even with military aid from China, the Gulf, Iran and Turkey. All these countries, we hear, are stepping up military backing for Addis Ababa (AC Vol 62 No 21, At the mercy of friends).

More problematic for regional politics, the United Arab Emirates and Saudi Arabia are supplying surveillance and intelligence services. Yet they are also strong allies of Egypt, whose government has every interest in seeing a weakened Ethiopia. The fight between Egypt, Sudan and Ethiopia over the filling of the Grand Ethiopian Renaissance Dam is far from over, although international attention has been diverted towards Addis Ababa’s war with Tigray (Dispatches 9/7/21, Dam solidarity in North Africa).

International appeals, from the UN Secretary General António Guterres and the Nobel Prize Committee, to the federal and Tigray forces to stop fighting have had little effect. The UN Human Rights Office in Geneva reports that at least 108 people, including several in a refugee camp, have been killed in federal air strikes since the beginning of the year. Along with that, the World Food Programme has warned that its operations in northern Ethiopia could grind to a halt because of the intense fighting in the area.

Break out
So far, Tigray’s forces have had little answer to federal bomber jets or drone strikes. And their withdrawal to their home region means they can do little to break what amounts to a continued blockade on aid to the region.

That could prompt the TDF commanders to try to break out of the region in the coming weeks – unless there is some progress on ceasefire talks, which looks unlikely – and there have been ongoing skirmishes and reports of a build-up of Tigray’s forces on its borders. Although Abiy’s government released some TPLF veterans, including one of its founders Sebhat Nega, from prison on 7 January, the prime minister has repeatedly argued that dialogue with the current TPLF leadership is impossible (AC Vol 63 No 2, Prisoners’ release sparks war cries). That was why the government rejected the ceasefire offer, and why many of its Amhara supporters insist that disarming the TPLF is an essential war aim.

For Tigray’s forces, the status quo of bombardment and blockades is also untenable. One way of trying to break the blockade would be for them to march on Humera, which lies near the Ethiopia, Eritrea, Sudan border and is controlled by the ENDF and Amhara Fano militia.

Worried about the vulnerability of the Humera area last month, Abiy asked the Eritrean Defence Forces (EDF) to secure the route, said an insider in Addis. Now the EDF has stationed two mechanised and three infantry divisions, well over 30,000 soldiers, on the Humera border (AC Vol 62 No 9, Issayas in for the long haul).

March south
Another option for Tigray’s forces would be to launch a second wave of targeted attacks towards Addis Ababa, Gondar and Bahir Dar, calculating that they would have battlefield superiority over the ENDF. Whether the TDF chooses to go north-west towards Humera or south towards Gondar and Addis, it would mark a new cycle of conflict and yet another escalation.

Should the Tigrayan commanders opt to shore up defences around their region, they are likely to continue to clash with federal forces and their allies in the regional militias, especially in the disputed section of southern Tigray and around Mai Tsebri town. The ENDF is improving its position by expediting training and federalising the regional militia such as Fano in Amhara and the Afar forces. Together with Eritrean forces, the ENDF and its militia allies are keeping up the pressure on Tigray’s northern and southern borders.

The batch of prisoner releases on 7 January, which included senior Tigray and Oromo figures, triggered searing criticism from leading Amhara politicians calling for a tougher prosecution of the war. These contrary pressures on Abiy, as regional officials and international organisations urge him to expedite the promised national dialogue and open ceasefire negotiations, will make it difficult to pull back from his proclaimed aims of defeating all insurgents.

One thought on “Ethiopia: After concessions, rival armies fight on ”